PHOTOS OF IMPORTANT LILAC R92 MAGNUM: Hubert Rigal of France has photographed Lilac F9-0600 extensively. This bike was one of only 2 500cc models officially imported into Europe in 1967. It has the first Magnum frame and the last Magnum motor. The top end is the heavier Electra style. The bike was restored in 2018.

TANK BADGES: I have produced some self-adhesive domed urethane stickers which you can use as a substitute for acrylic tank badges. For details send me an email.

Lilac Museum Exhibition Materials: An extensive exhibition of Lilac motorcycles and memorabilia was presented at the Hamamatsu City Museum by the Japan Lilac Friends Club from Sepbember to October of 2015. Visit this page for a poster, photos and videos. (Added to site October 29, 2015, on the Gallery page under Museum Exhibit.)

MAGAZINE ARTICLE: "Marusho Magnum Electra, From Hamamatsu via Bavaria", in Australian magazine Old Bike Australasia, Issue 50, 2015. Added October 25, 2015. This features one of the last Marusho-badged Electras and includes a thorough history of Lilac.

MAGAZINE ARTICLE: "Lilac Electra-Fying", in Australian magazine Two Wheels, Issue 2, 1967. Added July 12, 2014. This is a road test of one of the 6 Electras exported to Australia at the end of Lilac's life. 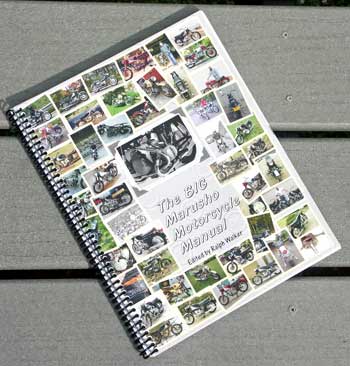 CONVERT YOUR MARUSHO TO URAL IGNITION! Click the thumbnail to visit the Technical Articles page, where James Hughes has generously contributed directions for replacing the problemmatic Marusho advance unit and impossible-to-source points with Russian parts.

2009 was the 50th anniversary of the introduction of the Lilac V-twins, the company's most successful product.

To commemmorate this historic occasion, Mr. Kotaro Furuta, proprietor of Jungle Scooters in Japan, had the drawing below created by Takashi Harako.

The rider was the well-known Lilac designer and later Bridgestone designer Mr. Eiji Hayashi. In 2010 (my latest information) Hayashi san was still employed by Bridgestone at age 77! Thanks for the use of the image, Furuta san.

This site contains information on Marusho and Lilac motorcycles manufactured in Japan in the 1950s and 1960s.

This site was opened April 13, 1997 and last updated January 9, 2019. If you wade through this Web site you will probably learn more than you want to about this little-known maker of unusual, classy, sophisticated and quirky motorcycles. At least 50,000 were built in Japan between 1950 and 1967, and the company had a good chance of matching Honda's success. It has been 52 years since the last bike rolled off the assembly line at Hamamatsu but loyal Marusho/Lilac fans in Japan, the U.S., Canada, Mexico, Brazil, Argentina, Australia, New Zealand, Great Britain, the Netherlands, Belgium, Sweden, France, Germany, Norway, Malaysia, India, Croatia, Thailand and other countries keep these machines on the road.

This is not a real counter! The site gets about 1000 unique visitors a month. The site was created in July of 1997. I have used a number of counter services over the years. They all go bankrupt with no notice, so I'm not bothering to count visits now. The number was over 100,000 when I ceased counting.

The only way I'll ever know WHO visited it and what part of the world you are from is if you send me e-mail.

Links to all my websites:

Gruetzi.com: Photos of Switzerland, with an emphasis on transport.
Zweisimmen.com: Photos of the MOB (Montreux Oberland Bernois) narrow gauge railway in Switzerland, plus information on G (garden) gauge model railroad projects of mine.
Schau.Biz: Swiss shooting medals, beer coasters, etc. for sale.
BernBear.com: Our log cabin in Greene County, Virginia, and examples of the use of the Bern Bear heraldic symbol on decorative objects.


WebLackey.com: At the moment this site is being used to describe a rare book which was sold to the University of Auckland in 2013, namely, the Numbered (154 of 600) 1928 first edition of Marco Polo's Il Milione, edited by Olschki in Italy. I'm leaving this page up even though the book is sold, because very little information is found anywhere else on the WWW about this book.
"Lake" Applet Images: Animated water scenes using the 'Lake' Java applet.