Note: All V-twins were OHV and had electric start and shaft drive. All except the C-81/C-82 were 66°, that series being 90°. All used a rotary 4-speed transmission with shift pattern of Neutral - 1 - 2 - 3 - 4 - Neutral. All had telescopic front suspension and swing arm rear.

*The designation '/1' (and '/2' and '3') are not official Lilac designations, just a convention adopted out of necessity. The closest the factory came to distinguishing them was when the '/2' was introduced as the 'Improved'. I have written more about the confusion in model names in 'Part 1: The Early Years'.

Thousands of these were produced. Some were exported to Australia but only a few went to the U.S. The toolbox was built into the top of the tank. As with most Lilacs both a dual seat and a pillion seat were offered.

The most valuable part of a Lilac V-twin, the unusual stop/tail/turn/license plate light. "V" is made of reflective material. Fortunately, authentic reproductions are now available (details on request).

For 1960 the tank was changed, the frame reworked, and the tools placed in a banana-shaped box on the side. Again, thousands of the LS-18 were produced, several hundred being imported by M-C Supply to the U.S. Cost was US$695.

The Register includes 26 surviving examples, which is surprising since most were probably built after bankruptcy was declared in 1961. A few were even built during 1962 aand 1963, when there really was no Marusho activity. The main difference between this bike and the /2 is the tank, a much more attractive one. This bike is indistinguishable from the MF-19 below. All specs remain the same as the /2 except the weight, which is down from 166kg to 160kg.

Factory photo on left courtesy of Kikuo Iwatate. One of those big encyclopedias of real and imagined motorcycles mentions the Lancer Co. that made copies of Lilacs in Japan in 1960. I mention that to pound home my point about believing nothing you see in print about Lilacs (except of course for this Web site.)

This is a good point to talk about the differences between the 250cc and 300cc motors. All the 250s are configured the same, with bore and stroke of 54 x 54. The 300s were stroked, with cylinders and pushrods 3mm longer and a different crank. The 332cc prototype used a 58mm bore and the 63mm stroke crank. Extra h.p. for the sport models simply came from 2 carbs. Early 250-300 V-twins had a 1-piece crankcase, later ones split vertically from front to back. An oil filter housing is visible on the left side on late engines, such as Kurt Michl's LS-18/2 and the LS-18/3 above.

These are very handsome bikes, with a nicely sculpted tank that would be used with slight modification on all the 500cc bikes. Side tool boxes were replaced with sporty oval covers and the tool box moved to the rear, where it sported a vestigial luggage rack. The toolbox was opened with a coin. The name 'LILAC' was embossed in the side, the writing on the early models being at an angle and on the later models horizontal. 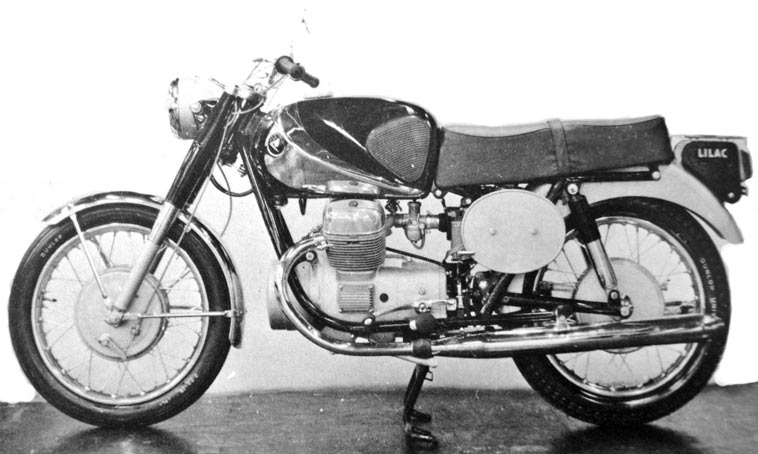 Another variation on the V-twin theme, this was a 300cc version of the LS-18/3 above. Only 3 are known to exist, all in the U.S. A 1960 model was reported in Japan but the report hasn't been substantiated. This was an LS-18/3 with the taller cylinders, longer pushrods and longer stroke of the MF-39, but still having only 1 carb. As mentioned in the discussion of the LS-18/3, these two bikes are indistinguishable.

The first of 3 small V-twins made by Lilac, this machine had squarish mufflers penetrated by the rider's and passenger's pegs. This was a 66° engine like all other V-twins except the C-81/C-82, which were 90°.

*Many Lilacs were given nicknames (Baby, Thank-you, Dragon, etc.) and this manly moniker was sometimes associated with the CF-40.

**There is no credible evidence that the FF-40 ever existed, even in prototype form. I mention it because I don't want anyone to think I never heard of it. If the CF-40 had been a success in the U.S., it is reasonable to assume that Lilac would have stroked it as they did the LS-18 and LS-38 for folks like us that don't have to worry about the 125cc licensing class common in other countries. 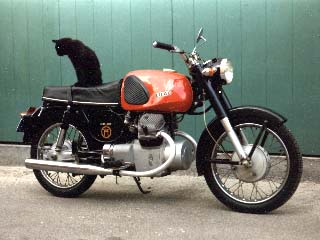 The photo is of Homer Knapp's (CA) CF-40 with his cat. This was the smallest bike exported by Lilac to the U.S. As stated in 'Company History' it was not popular because it was only $100 cheaper than the LS-18 and was still pretty heavy and perhaps ugly. The author has one and likes it a great deal. You won't spot the tool box. To get to it, remove the seat by spinning two aluminum levers at the rear. This exposes a trap door at the rear of the tank. Note the finned valve cover, which gives the impression of a 2-cycle. Other than that the engine is probably the same as the CS-28.

At least three members of the Japan Lilac Owners Club have nicely restored C-81s. The photo above, © Yosiaki Hioki, is of one of these, taken about 1980. The Register includes 11 of the C-81s, but no C-82s are known to have survived, and may have been prototypes only.

*Establishing the years of production for this bike illustrates one of the problems with this research. The Register includes bikes with an encoded 1961 frame number and others with higher frame numbers with no date. The real question is, what was going on between 1959 and 1961 that caused Lilac to produce 3 totally different 125s?